In the Japanese office in which I work there are eight people of whom I am afraid. Each of those eight people is afraid of twelve people in addition to the other seven, for a total of one hundred and four people who are afraid of or feared by at least one other person...

Ha, ha, just kidding. I work for the Kriasho Corporation, a chain of eikaiwa, (English conversation schools) with 300 branches across Japan where adults and children come in once or twice a week for a fifty minute English lesson. Kriasho schools employ both Japanese and native English speaking teachers, with most of their classes taught solely in English. The corporation prints its own textbooks and trains its own teachers. Most schools average about four hundred students and are open from noon to nine PM, with classes ranging from private lessons to group lessons capped at twelve. Foreign teachers are not required to know Japanese and work thirty-six hour weeks while teaching anywhere from twenty-four to twenty-eight lessons per week.

My school is in Kofu, a small city about two hours west of Tokyo, on the fifth floor of this building: 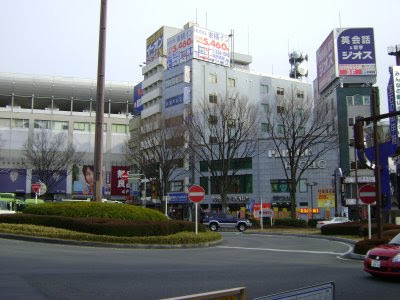 It’s the one front with the HOTEL sign mounted on top. The smaller building to the right is a pachinko parlor that I have not yet dared to enter, and the bigger building to the left is Yamako Department store across the square from the train station (not pictured).

As you may be able to tell from the picture, Kriasho Kofu, like most things in Japan, is quite small. Outside the main lobby are eight classrooms, each about half the size of a Bennington single, and a teacher’s room crammed with lesson materials and office equipment. You can view pictures on the website , though be warned that it’s in Japanese. (The fourth tab from the left is the Staff page, which is helpful for when I can’t remember my coworkers’ names.) The staff includes a manager, an assistant manager, two full-time Japanese teachers, five part-time Japanese teachers, and one other native English speaking teacher.

Kriasho Kofu’s size extends to its student population as well. One hundred seventy adults and twenty-six kids attend Kofu school, about half the size of the other Kriasho East Japan schools my training mates are teaching at. Most of my classes are only one or two students, and my largest so far has been five. (This has made it much easier to get settled in.) I teach classes ranging from low-intermediate to advanced, plus one advanced class for middle-school students, two elementary school classes, and one preschool class. I have met many people and remembered few names.

The Kriasho East Japan Corporation handbook also specifically prohibits me from releasing any information on my blog, personal website, or social networking page regarding Kriasho business practices or personal student information; as well as any words or pictures that depict the company, its staff members, or students in a potentially offensive, embarrassing, or otherwise negative way. (I’d quote that section of the manual here, but I’m not allowed to reproduce that either, in whole or in part.) The consequences for such infractions include suspensions, pay cuts, immediate dismissals, or worse: a talking-to.

(“They can’t deport you though,” Marcel explained as we sipped eight-hundred yen glasses of draft beer at the foreigner bar in Omiya made up to look like a British pub where Japanese businessmen gathered after a long week of work and cigarette-smoking Brits chatted idly on high stools. “That’s one power they don’t have.”

“South Korea’s much lot stricter,” Marcel said with all the experience of his two years teaching there. “Working visas are given under sponsorship of a Korean company, and are only good for one year. If they fire you, or if you get caught taking private lessons as a violation of your employment, you lose your visa and they can deport you. But in Japan, the rules are different. Our entry visas are good for three years regardless of whether you’re employed. That’s why so many teachers were able to stay when NOVA went under. If we quit or lose our jobs, we can just find someplace else to teach.”)

Because of this blogging rule, I probably won’t be talking much about work here and will instead focus on other aspects of my adventures in Japan. Any anecdotes that do make it into this blog will be heavily obfuscated, with all names changed or blanked out as with my tutoring and substitute teaching entries—because now what I post online could have far more serious consequences than just the crazy cigarette-smoking Amber waiting to accost me in the shadows outside Commons.

Here are some other resources if you’d like to read further:

Kriasho's Recruiting page
Kriasho Kofu’s website (for all the skimmers)
Jobs in Japan – Choosing a school
Just some article I found
Posted by Ian at 10:12 AM No comments:

Approximately 65.5 million years ago at the end of the Mesozoic Era a fiery comet struck the earth’s surface provoking environmental changes so monumental that not even the mightiest of dinosaur species survived.

In 49 BC, Julius Caesar consolidated control of the Roman Republic and used his status to reduce the voices of those opposed to him and assume veto power over the Senate, gradually assuming the role of dictator. This precedent of singular control would remain as the Empire reigned, declined, and eventually fell.

On June 28th, 1914, the Archduke Franz Ferdinand and his wife were assassinated, triggering the war that would end all wars and forever change the face of Europe and the world.

On the evening of May 6th, 1937, the German airship LZ 129 Hindenburg crashed near Manchester, New Jersey when the flammable hydrogen inside caught fire and exploded. The accident was seen by millions of theatergoers, and overnight the publicity ended the pursuit of airship technology.

On February 17th, at approximately 4:15 PM Japan Standard time, I signed a contract for my first cell phone. It’s a sleek gold color, and the woman behind the counter kindly switched the language to English. Now I just have to figure out how to use it.
Posted by Ian at 9:40 AM 3 comments:

When last we checked, our hero was preparing to climb aboard a plane to escape the emptiness of his post-college life in New Hampshire—leaving his friends, his family, and his Nabokov collection behind—to teach English in Japan in hope of fulfilling his craving for adventure, finally attaining independence, paying back his student loans, and padding his resume to make himself more attractive to potential employers back in the States.

There’s a lot to see here—not so much at the Seminar House, where the trainers all speak English and we’re surrounded by textbooks and Western-style office furniture all day long; but outside in Omiya where I venture out with the others. The streets are full of activity all day and night; a flurry of sights and sounds that overwhelm the senses and leave me feeling dizzy and stupefied after too much stimulation. There are tall buildings that rise up near the train station, hung with banners and flashing neon lights that beam advertisements all across the city. There are brick and concrete apartments in a rainbow of whites, grays, browns, blacks and brick patterns that give the streets a distinct otherworldly feeling. There are strange road signs whose meanings (aside from the universal blue P) I cannot decipher, pointing the way to frantic drivers in their Toyotas, Hondas, Nissans, and the occasional Volkswagon. There are signs—everywhere signs—read horizontally, vertically, and in cartoonish half circles. There are the alleys and the side streets, the suburban blocks and the overpasses, the zig-zag intersections crossing every which way, and the narrow one-ways where cars squeeze between one another and bike-riders of all ages reign supreme; convenience stores and vegetable markets and electronics stores and hair salons with outrageous prices posted outside the windows next to restaurants with plastic food replicas in glass cases alongside tiny luncheon houses with long counters where businessmen and young people sit alone munching noodles with pachinko parlors on every street that draw my eyes with their colored lights and loud noises (for everything in Japan seems to flash, flash, FLASH! turning the streets into epilepsy-inducing spectacles that would put even the most spectacular American laser light shows to shame) and there are arcades too in the red (pink?) light district where the strippers dressed in skintight outfits stand outside calling out to the Japanese businessmen on their night out and still more posters list the girls promoting promises of pleasure inside and other shops that must sell sex next to the famed Love Hotels that charge by the hour and now all of us are getting wierded out and it’s time to turn around back past the wooden-doored bars and the karaoke rooms one that Shirley says is good cheap but expensive after eleven for people who really live the night life here back to the station where the taxis wait in a massive square the McDonalds pictures show sandwiches that haven’t been dressed up by crews to make them look their best oh no for everything here exists in a random jumble of activity that makes my head spin and sometimes I have to look down at the yellow line they’ve installed to help the blind people walk just like the different lengths of the yen that’s easy to convert all you do is pretend theyre pennies times ten single yen coins are useless and light like a ticket token at funspot which looks like an antique machine shop compared to the rows of games here street fighter 4 horse racing photo booths drum games like in lost in translation but people here sit slumped over their machines smoking endless cigarettes the smoke so thick go and get some air tom says the men here all get sucked into their games leaving women unfulfilled take advantage hard to say so many of them everywhere walking strolling talking looking vivacious welldressed smiling highcheeked brighteyed staring everyone staring at us gaijin trying to hide it not just girls longhair some dyed blond funny idea for a style do they so admire the west that they desire to emulate us so many ways even writing everywhere jumps out not like kanji my mind skips over makes no sense but kana try to read looks like —shujin tsuma— kamari—no—— that’s too much for now have to leave this night life behind because Im tired and I think I need to lie down.
Posted by Ian at 12:58 AM 2 comments:

Labels: Japan from Below, The Tourists' Japan

Christ. This is it. My last night in New Hampshire.

I'm nervous, sure, as I always am before uncertain experiences; but mostly incredibly excited at what lies ahead, combined with a large dose of hectic packing craziness. There's a lot of things I'm not going to miss at all (barking dogs, snowy driveways, early painting mornings, questions about my life's direction, arguing parents, car problems, loneliness, heart-crushing memories, commuting, my parents' friends, more loneliness, dim-witted yokels, and lazy kids) and a lot that I will. Of course, I'd make a full list of the people and things I miss that I've already lost to one degree or another, but my plane leaves in seven hours.