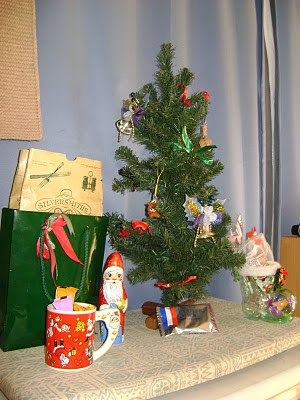 I'd just like to take this opportunity to wish everyone out there a Merry Christmas, and especially to all those expatriates and those who are separated from their loved ones. And to those of you in Japan, Happy Emperor's Birthday. It may not be the most festive of holidays, but it's still worth a mid-week day off. Department store sales aside, how about a little Western-style Christmas cheer?

Beat egg yolks until smooth. Stir in condensed milk, sugar, vanilla, milk, and stir well. Beat the egg whites until stiff (or as stiff as you can by hand) and add to mixture. Serve cold, garnished with a pinch of nutmeg to taste (and rum, if desired). Makes about 1.5 quarts.

Merry Christmas, everyone.
Posted by Ian at 6:08 AM 2 comments: 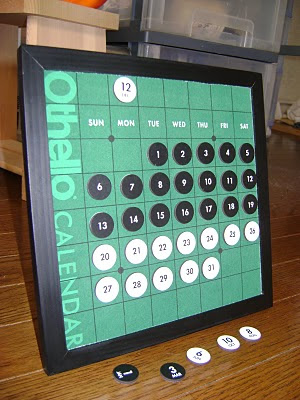 This may be the most amazing thing I have ever seen. I found it at the stationary shop in Eclan buried behind a display of small gift envelopes. The box was covered in dust and quite faded. Japanese people take Othello pretty seriously, and Toyokazu smoked me without even trying. I'm just happy to have the calender.

Fun Fact for the Day: Othello was invented in the city of Mito, in Ibaraki, Japan.

Learn Japanese with Ian!
osero/ribasi =Othello/Reversi (as it is sometimes called. Personally, I found the former to be much more dignified)
Posted by Ian at 10:28 AM No comments:

Charisma Man Walks Among Us

I briefly mentioned Charisma Man in an earlier post after Tom introduced me to its greatness, but found it far too brilliant to lay buried in an entry with a half dozen other links no one would bother to click on. The comic ran from about 1998 to 2005 in an old gaijin mag called The Alien (which later became Japanzine), and I'm currently on the lookout for a reasonably priced copy of the out-of-print collected series. (If any gaijin out there can help me on this quest, I'd be much obliged.)

Charisma Man is the epitome of the arrogant, self-interested, ill-qualified English teaching gaijin who flees a humdrum existence in his native country to seek fortune, respect, and lots of hot sex. Upon reaching Japan, he is transformed into a muscular hunk of pure confidence who draws scores of hot females to his side until he encounters his arch-nemesis: Western Woman.

What captured my attention most about this strip is this idea of a misfit gaijin not being able to make it in his home country, and coming to Japan as an easy way to gain power and popularity. Just like Superman on Earth, the most ordinary of Western attributes become extraordinary feats here in Japan. Guys who worked deadbeat jobs back in the West discover that their ability to speak one of the most in-demand languages in the world instantly qualifies them for a high-paying teaching position that demands instant respect from the Japanese people. Those misfits from the Western dating scene can come here and—with the help of a little confidence—win instant attention from females of all ages, sizes, and levels of English ability. The capacity to consume more than three glasses of beer, reach tall items on shelves, accomplish the simplest of home-repair tasks, wield a phallus longer than four inches, and instantly answer colloquial English questions impress people like magic. And even the simplest of Japanese language skill or chopstick handling will never fail to impress a crowd.

But this existence is all a facade. However much his newfound powers boost his ego to superhuman proportions, Western Woman proves that Charisma Man's popularity is all a sham by knocking him back to his true geek status. I see plenty of guys here using their gaijin status just to win girls, but the Charisma Man phenomenon goes deeper than that. Success in Japan for all but the truly qualified is just a lot of smoke and mirrors; most gaijin aren't doing anything that any number of Westerners couldn't do as good or better than themselves (in the classroom or the bedroom). Without real talent you are nothing; and all the colloquial-English in the world won't deliver you real success. Maybe every gaijin needs a Western Woman to hold up the mirror and show him his true form.

Still, for those who can't stand the reality of that mirror, Japan makes a great hiding place. Why face the humiliation of your pathetically-low Western job qualifications when you can make a real salary, sleep with dozens of women, and be worshiped as an eigo no sensei instead?

For more Charisma Man strips, click here or here. This article is also informative reading.
Posted by Ian at 9:47 AM 2 comments:

Labels: Japan from Below, Teaching, Work

I recently had an urge to update my contact information on the Bennington Alumni website, and requested a copy of the Alumni Magazine. (Thanks, Dorothy.) Aside from one of Steven's essays on Marlene Dietrich and a few other interesting articles, the magazine was plagued by the usual shameless requests for donations disguised as inspirational banners. One article that I found equally ludicrous was a report on student house renovations, which contained some egregiously poor attempts to describe the character of each house. I'm reposting some of the most ridiculous Facts here:

Kilpatrick
Fact: The house is known for hosting several of the largest annual parties on campus.
This is a really nice way of saying that Kilpat (for only Liz Coleman and the Alumni Magazine refer to the house by its full name) had the honor of hosting the Dress to Get Laid Party, celebrating the day when Bennington upperclassmen can have sex with freshmen every October 1st, debauching the campus every St. Kilpats Day, rigging a bathroom soap dispenser to serve alcohol, and filling a kiddee pool in the common room to use as a skeezy hottub in addition to countless other infamies I'm not even aware of.

Fels
Fact: Has its own washer and dryer and one of the newest kitchens on campus.
This is the most useless fact I could possibly think of to describe a Bennington house. Is Fels really so uninteresting that it has to be described in terms of its appliances?

McCullough
Fact: According to house chairs, McCullough has a very strong house community with an emphasis on food and spontaneity. House members provide a great deal of support for one another.
A contradiction of terms, a sentence that begins with "According to..." can hardly be considered as fact. Poor editing aside, "support" in this sentence actually refers to McCullough residents lending their +10 mana counters when their housemates encounter wandering bands of orcs during Larping tournaments.

Leigh
Fact: The Bennington Free Press says of Coffee Hours at Leigh that "no one knows exactly what goes on here, but everyone wants to be a part of it."
I find this hard to believe, and am pained that this was the best they could come up with for my former residence.

Dewey
Fact: Named after John Dewey, one of the fathers of the progressive education ideals that Bennington was based on.
Dewey is such a cesspool that the writer has decided to retreat behind historical detail rather than risk disgusting everyone with an accurate description.