The Mole That Poked His or Her Head Above Ground

All of my co-workers consistently misuse the genderless plural pronoun in place of a singular pronoun, as in the following example:

Someone left their book on the table.

Their is a pronoun used for more than one person (They left their books on the table), but here, only one person left a book. You wouldn't say Cinderella left their slipper at the ball because that doesn't make sense either.

People talk like this everywhere, and it's a reality I've grown to accept, like the prevalence of pro football or the existence of Crocs. Today, however, I found this in a kindergarten newsletter:

Every group of moles has a guard. The guard mole pokes his or her head above ground and warns the other moles of danger.

I was aghast at such an awkward, though grammatically-correct sentence from one of my co-workers. His or her head? What had caused such a pedantic shift?

Whereas in previous centuries, the teacher's sentence would have been commonplace, our language is constantly changing (and whoever be he who thinketh othewife might best have his head cleft clean from his body), and the singular their may be here to stay. I predict that in a generation or two, the casual their will be formally regarded as correct, and blog entries like this one will seem as dated as they are condescending.

Want to learn more?
The Genderless Pronoun: 150 Years Later, Still an Epic Fail
The Epicene Pronouns: A Chronology of the Word that Failed
Posted by Ian at 6:52 PM 3 comments: 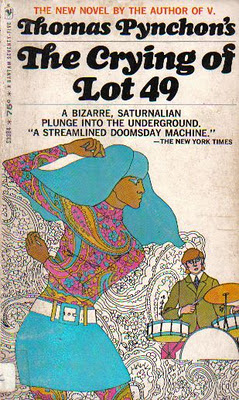 1967 Bantam paperback edition of Thomas Pynchon's The Crying of Lot 49*
I love old paperback art, and this one is no exception. Paisley designs should be integrated into far more book covers.

Also, I highly recommend this book to anyone interested in a bizarre, off-the-wall, novel that still manages to retain a concrete hold on its plot and characters. (It's also short!) Pynchon's prose expresses the most everyday actions in strikingly unique ways, and for that I adore it.

More and more often, I see our generation united by common memories of mass consumer and pop culture from our childhoods (approximately 1983 to 1996), thus firmly establishing the popularity of sites like The Angry Video Game Nerd, the Nostalgia Critic, and this site examining awesome VHS covers from the ‘80s.

The ‘80s covers might be a different story, but were all those cartoons, movies, Nickelodeon shows, video games, and commercials really worth enshrining, or were we just at an impressionable age where even marginally serviceable entertainment would blow our minds? Is it possible that today’s mass culture (mediocre by our standards) has the same effect on kids, and in twelve years we’ll have a whole new generation talking about how cool the Geico gecko was?