In Which the Narrator Actually, For Once in His Life, Completes Something Substantial

...or, close enough. But I did have cause to celebrate today as I put the finishing touches on the first complete draft of the script for Carcrash Parker and the Haven of Larpers, a project more than two years in the making. For those who may have missed my earlier posts on the subject, I'll give a quick runthrough:

The summer before I came to Japan, my good friend Mike Rushia and I were looking for a project to fill the creative void in our post-college lives. Mike had been experimenting with the game design program Multimedia Fusion and wanted to try making something substantial. Somewhere in between one of our runthroughs of King's Quest V and our attempts to beat Shadowgate on NES, we started to talk more seriously about doing an adventure game. We had both grown up with the PC classics that had defined the genre in the '80s and early '90s, and knew the story-intensive, tongue-in-cheek style of the Sierra games backwards and forwards. All we really needed was an idea.

We started with a loose concept: a twentysomething classic gaming hound wakes up one day to find his Commodore 64 stolen by a gang of Larpers. From there, we planned out the puzzles, game design, and narrative tone together, while I tackled the characters and background story. Mike started on a point-and-click interface that would breathe life into the finished game, while I spent my evenings writing the game's script after working days painting walls and tutoring kids. I finished the first draft a few weeks before the monumental upheaval that was my departure for Japan, and only six months later did I feel adjusted enough to finally resume work on the project.

The current draft of Carcrash Parker and the Haven of Larpers is by no means finished, but is significant for being the first complete version. I'd like to revise it further, iron out a few kinks, and fix some storyline problems within the next year with the ultimate goal of starting production sometime after I get back to America, but we're taking that one step at a time. Getting the game drawn and illustrated will no doubt be the biggest obstacle, and we've spoken to some friends about providing some artwork.

I hope that at the very least there will be some progress to report in the coming months, either on this blog or on another website specifically for that purpose. For now, though, I'm looking for anyone willing to give feedback on the current script draft, so if you're interested in reading through a lot of Larper jokes and sarcastic narration, e-mail me at mr_bean88@hotmail.com, or drop a comment in this post.

Also, if any artistically-inclined folks out there are interested in working on backgrounds, character animations, or still scenes for what will no doubt be an awesome adventure game, definitely drop me a line.

That's all for now. My next post will be the 150th on this blog, and I'm in the process of putting together something entertaining for this personally important milestone. When I say it like that, it sounds like I'm having one hell of a week.
Posted by Ian at 6:17 AM 2 comments: 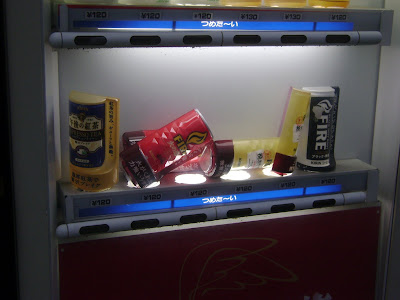 In Japan, where the trains always run on time, the taxis are always spotlessly clean, convenience store food is always fresh, suits are always neatly pressed, the clerks always wear big smiles, and children never have learning disabilities, I am instinctively drawn to anything that doesn't fit in.
Posted by Ian at 10:07 AM 1 comment:

Who Comes to Eikaiwa?

“Japanese people who study English aren’t typical Japanese,” Katy observed pointedly several weeks before she escaped the routines of teaching for a new life back in America. “I think everybody who comes to eikaiwas is a little different.”

Different—chigau, a Japanese concept hopelessly intertwined with the concept “wrong” in a world where deviation from accepted norms is rewarded with confused stares, uncomfortable laughter, flustered excuses, and awkward stigma. In Japan, marketing things that are unique won’t bring in any customers. That’s why NOVA, desperate to soak up Japan’s expendable income, pushed their advertising budgets to extravagant levels to make learning English fashionable and convince consumers that dropping by a NOVA school was just as trendy as driving a nice car or carrying the latest handbag. But NOVA is bankrupt now, eikaiwa income is dropping across the board, and learning English is going out of style. That begs the all-important question: who’s still going to eikaiwas?

At my eikaiwa, a typical student is a solidly middle-class adult anywhere between twenty-five and thirty-eight years old. Most of them are unmarried and live with their parents (a style of habitation that holds no stigma in Japan, and is advocated by many as a means of saving money), and many are unhappy with their white-collar jobs. Some of them speak of a loss of direction in their lives, of past confusion about their goals, or of all-consuming loneliness. They come to eikaiwas because they dream of teaching English to kids, because they want to travel to exciting new places, because they want to meet people, and because they want to have interesting conversations with others their own age. Some have lived abroad and seen things that most Japanese will never see, and find escape from the demands of their culture by speaking English. Other students find release through foreign movies, musicals, or friends. A few want to make a life change but aren’t sure how. At least one wants a foreign boyfriend.

I see in the eikaiwa students an excited passion that I don’t see among the stone-faced people walking on the street (although in Japan, you’re not likely to see any emotion on the street). They talk about all the things in the world they’d like to do but are held back from by jobs, obligations, traditions, and societal pressures; and in their eyes shines a light that separates them from the masses. They want something more, something different (something chigau?). Something is missing, and it frustrates them because they can’t define it. I can talk about with them the same things I talk about with friends back home who want to become great writers, actors, painters, musicians, sound editors, film directors, sculptors, biologists, illustrators, photographers, historians, senators, art teachers and psychoanalysts; the plight of enthusiastic twentysomethings who aren’t going to settle for a life of stagnation but who aren’t yet where they want to be. Their situation is not unlike my own, and we can relate because the world of black-suited salarymen sees us all as different.

This is what fuels the eikaiwa where I work, a small-city branch of a gigantic corporation desperate to stay afloat in a world of post-NOVA and Geos belt-tightening. There are of course other kinds of students across Japan whose money the eikaiwas have sought to capture: smiling kids, examination-cramming high-schoolers, curious college-students, bored housewives and international businessmen; but these students are merely transitory. Someday, when all the different twenty- and thirtysomethings are still exchanging ideas and looking to meet new people, the rest of the lot will have dropped eikaiwa the same way they dropped last year’s handbag.
Posted by Ian at 2:46 AM No comments: