At the Capsule Hotel 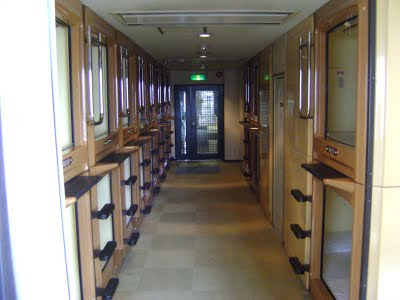 I've wanted to stay at a Japanese Capsule Hotel ever since I read about them in Nickelodeon Magazine when I was ten. The concept struck me as starkly representative of the super-efficient Japanese use of limited space, and I had an impression that capsule hotels were one of the hallmarks of Japanese culture.

I stayed at the Asakusa Riverside Hotel in Tokyo, next to a grimy outdoor seafood restaurant and across from a square where several hobos had camped out in cardboard boxes for the night. An emaciated gentleman behind the counter was annoyed by my attempt to speak Japanese, and instead directed me to a decrepit ticket vending machine using a series of coarse English phrases burned into his memory through years of repetition: fifth floor, turn right and right again, use locker room, shower room top floor, last shower nine AM, checkout 10 AM.

For 3,000 yen I received a locker for my bag, access to a shared bathroom, and sleeping capsule #506. The top floor housed the aforementioned shower room, a sauna, a coin washer and dryer, a narrow vending machine with coffee, soda, and four kinds of beer, two pachinko machines (undoubtedly the newest items in the entire establishment) a balcony overlooking the river and the Asahi building. The walls stood dull with the odor of mildew, and the walls—once a spotless white—had now dulled to an unsightly yellow. The whole place was very 1960's; and I half expected to see shag carpeting in the upstairs lounge, but instead found only a middle-aged businessman smoking cigarettes in his yukatta and scribbling in a notebook. 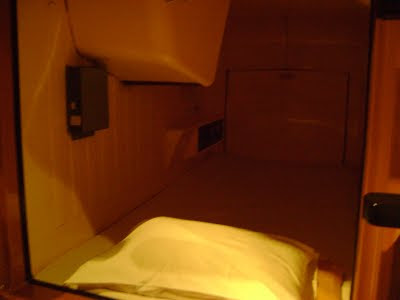 The actual capsule itself was actually bigger than I imagined, since I'd always heard the word "coffin" tossed around as a comparison. It was long enough for me to sleep comfortably, and tall enough to sit cross-legged. The capsule walls were as discolored as the rest of the place, and the interior was designed with a very Logan's Run view of how people forty years ago must have imagined the future. My control panel (center of the photo) had light switches, air control, a faded digital alarm clock, AM/FM radio, and the channel listings for the coin-operated television (top left). The futon was thinner than what I'm used to, but not so thin as to disturb my sleep. A window shade (also very '60s, this time with wood paneling!) provided privacy from the rest of the hallway, where only six of the twenty capsules were occupied. Everyone on my floor (on purpose, no doubt) was a gaijin.

As far as I can tell, capsule hotels are an outdated staple of Japanese ingenuity comparable to laserdisc players or fondue sets in the west. Every Japanese person I described the experience to told me I was crazy to go. Gaijin looking for cheap Tokyo lodging and older men who recall the capsule hotel's heyday make up the bulk of the clientele, along with those younger salarymen who miss last train and need a place to sleep off the night's nama-biru and tsumami.

All I have left to say is that Nickelodeon Magazine, you've done it again.
Posted by Ian at 8:06 AM No comments:

Labels: Japan from Below, The Tourists' Japan, Travel Adventures 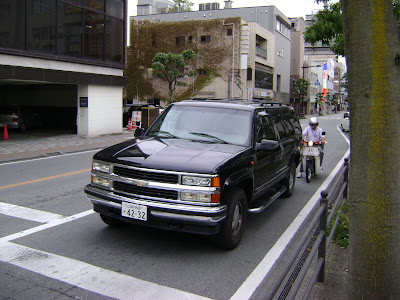 There is something odd about this picture. Can you figure out what it is?
Posted by Ian at 5:56 AM 3 comments:

The teacher’s room of an English conversation school. 9:25 PM.

Four Japanese teachers and one foreigner scurry around the cramped teacher’s room, marking attendance sheets, putting away lesson plans, pulling off nametags, and making phone calls to no-show students after the end of another workday. Amidst the commotion, another breathless gaijin enters waving his hands, his unkempt hair and cheap suit tousled by the exertion of the day. He addresses the teachers from the doorway as if they were a crowd of hundreds.

Gaijin: Attention everyone! I have an important announcement!

All eyes turn expectantly towards him fearing some disaster: a visit from the Head Office; a student who’s failed to renew his contract; or worse, a grammar question that even the foreign teacher cannot answer.

Gaijin: A student brought us three bunches of delicious Yamanashi grapes on Monday, purely out of the goodness of her heart. I helped myself to one of them last night and—I must warn you—they were the most delicious grapes I had ever tasted. (The others slowly go back to their work.) There are now two bunches of these famous purple mouth-watering Yamanashi grapes left waiting in the kitchen. These grapes are the size of ping-pong balls, and I myself can guarantee that they will not disappoint a single person who ventures to try them. Is anyone interested in taking them home?

Teacher #3: You can have them.

Matt: I guess I could, but I took some grapes last time and they just went bad in the fridge. I’d rather have you take them all than have them wasted.

Gaijin: (in disbelief) All right, is it really okay if I take both bunches home? Is anyone else even remotely interested in them?

By this time everyone is completely ignoring him as they finish out their day’s work. The gaijin shrugs and goes to collect his prize.

You would be amazed at how often this happens. Fruit in Yamanashi is so ubiquitous that people have long grown tired of the mammoth peaches, grapes, and cherries that the farmers harvest and hawk on the roadside every year. I assure you that I intend on taking full advantage.
Posted by Ian at 10:26 AM 1 comment:

Labels: Japan from Below, Teaching

Carcrash Parker and the Sierra Nostalgia

In addition to short pieces geared toward the Japanese gaijin community and the usual crap for this blog, this month I pulled out the dusty script for Carcrash Parker, determined anew to finish it. May God help me.

Last summer, feeling the frustration inherent in our respective day jobs and lacking any productive creative outlet, Mike and I set out to create a point-and-click adventure game. I still don't remember how we came up with the idea, or why it seemed so good at the time (though perhaps Mike can lend a hand recalling); but we figured that if I could write it, he could program it, and we'd figure out the pesky graphical details along the way. I came up with the concept one cloudy day at George's Mills, we designed the world map and game layout together, and behold: Carcrash Parker and the Haven of Larpers was born.

I wrote the script draft last fall, mostly in the evenings while I was painting for Dad at the Hillsborough house, and finished the ending lines on Christmas Eve while my parents worked on their yearly last-minute gift-wrapping in the other room. Mike, meanwhile, started making the engine, and we'd meet on weekends to discuss progress and make long lists of references we wanted to include. My coming to Japan threw a wrench in the gears of the project, because with all the chaos of getting set up, working on an epic adventure game was the last thing on my mind. It feels good to come back to this after so long; I've distanced myself from the writing of the first draft and can approach it more critically, yet the ideas are still fresh in my mind.

Carcrash Parker is hard to talk about because most people I know don't understand larping, let alone what the fuck an adventure game is; and talking about the project invariably leads to an explanation of one or both concepts. Since Mike and I only make fun of the former and are both passionate fans of the latter, I'll give a quick rundown:

Mike grew up playing the old Sierra games, and he introduced them to me somewhere around the time I saw my first rated-R movie (which, for the record, was Total Recall). We used to play a lot of the old text-based games (including the primitive yet eponymous Adventure) on the PC or the Commodore 64 where the player typed out all commands and solved puzzles using inventory items. These, however, were small potatoes compared to the Sierra games, which blew me away the first time we played them. These games, like a host of other graphical adventures of the time, allowed you to move your character onscreen and either type out commands or use a point-and-click interface to explore and interact with the game world. I'd never seen anything like the Sierra games before: the epic storylines, the full voice acting, the humor, the ridiculous puns, and that magic of being transported from Mike's darkened computer room into a world of malicious wizards, dark labyrinths, and suspenseful murder mysteries. (I'll stop here, since I spend enough time talking nostalgic in this blog as it is.)

Simply put, what we want to make is a point-and-click interface computer game in the spirit of Sierra where a player wanders a 2-D world finding items, solving puzzles, and interacting with other characters. No fighting engine, no character stats, no endless farming of items, and no customizable teams of party members. Adventure games have a limited appeal to a new gaming generation, but in them lies a vast storytelling potential that has not been fully explored. I was attracted to telling a story of 20-something, post-college frustration through an adventure game because of its non-linear structure. The player can piece together a complex, multi-layered plot by looking at various objects, having conversations with the right people, and exploring the world map at their own pace. The plot, backstory, and characters can all be spread through a gigantic narrative jigsaw puzzle. Like a good Faulkner novel, the player can finish without absorbing the whole story, or they can look deeper and see the bigger picture. Perhaps no game I know of accomplishes this feat more impressively than Laura Bow 2: The Dagger of Amon Ra, though King's Quest VI and the Quest for Glory series certainly come close.

So after all that pretentious-sounding build-up, that's where we stand. I'll try and keep this blog somewhat abreast of the game's progress, but until then, here's a few other adventure game links I recommend checking out:

AGD Interactive Games Page: A nonprofit company who's made some pretty kick-ass SVGA remakes of the first two King's Quest games, plus the second Quest for Glory game, free for download. As this is the easiest way to discover the old Sierra series, I highly recommend giving these games a try.
Peasant's Quest: Remember when the Homestar Runner website was the shit? I still enjoy their King's Quest 1 parody immensely. If nothing else, it's the only adventure game I've ever heard of to include a meatball sub inventory item.
Al Lowe's Humor Site!: Al Lowe created the Leisure Suit Larry series, which (before they degenerated into 3-dimensional abominations of taste and gameplay) were a hilarious batch of games with an, *ahem*, more pertinent goal than the average adventure.
Posted by Ian at 7:22 AM 5 comments: