Further Reflections on a Subject that Interests Only Me

A few weeks back I picked up a copy of the McGraw-Hill Handbook of English Grammar (and by "picked up" I really mean pulled off my bookshelf where one of my apartment's previous inhabitants had left it) and started devoting a morning or two every week to expanding my knowledge of grammar, usage, and all those pesky technical terms. This may have been a poor decision since the Japanese Language Proficiency Test looms forebodingly on the horizon and I already had a lot of grammar and kanji to brush up on, but I knew it would be helpful for my writing, my ability to self-study, and my job. The latter was really the biggest contributing factor, as students will often come to me with grammatical queries ranging from the commonplace to the minutely detailed.

"I have a question," asked a particularly curious high-school girl after the lesson had ended.
"Of course," I replied in a tone of utter confidence.
"What's a modal?"

My blood ran cold as I leaned over the grammar page of her textbook (which was thankfully in English) and read a note about how to adjust the structure of requests using modal verbs with an example that did not make at all clear what a modal was. The other students were attracted by her question and looked at me in intense anticipation of some useful bit of information they could only get from a native speaker. There was a dead silence in the room as I ran through the sentence trying to figure out which of those words could possibly be a modal, a term I knew I'd skimmed over lightly in grammar textbooks a dozen times without bothering to understand the meaning of.

I waited as long as I reasonably could keep up the charade of interpreting the textbook example, then feigned an exaggerated note of recognition. "Ah, I see! Here, a modal is a kind of special verb in English, but don't worry about this too much. Basically, this sentence means..." (Here I lapsed into an explanation of the example sentence using the grammar we'd covered in class while dodging the initial question, which yielded thoughtful nods from everyone in the room.)

This situation happens more often than I care to admit. It is particularly humiliating when the question comes from one of my junior high-school students, a precocious girl who is studying for several major English exams and is interested in nuances so subtle that they boggle my mind. There is an expectation inherent in every class that a native-speaking English teacher will always know the answer, and to admit that I don't dashes students' confidence to a crippling degree. It also makes me feel like a gaijin hack who gets by using only his natural ability rather than any actual knowledge of English grammar, and it is a sad reminder that any English-speaking idiot can come out here, hold up the cards, play the CDs, and be an eikaiwa teacher. I guess I just want to do it better than that.

Some interesting facts I learned from my foray into English grammar: 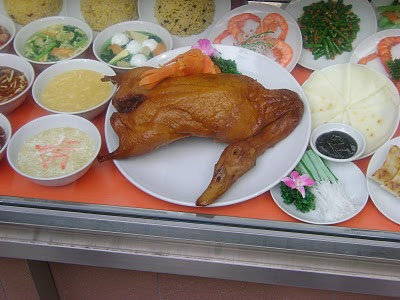 Most Japanese restaurants store plastic replicas of their food inside glass cases out front so that passers-by can get a clear idea of what delicacies (or cheap noodle bowls) await them. This duck, which was the centerpiece of an all-you-can-eat restaurant in Yokohama's Chinatown, is the largest and most elaborate one I've ever seen. There's something eerie about the plastic eyes staring back at you.

Plastic food in Japan has fascinated me since I've come here, though most of the good replicas have to be ordered directly from the manufacturer. The only ones you can buy easily are cheap keychains and tiny cuts of sushi. I want some very badly as a memento.

Two weeks ago, workmen came to gut the building and take the glass cases of food away. They are probably in a dumpster somewhere now. Part of the sidewalk is closed off, and I hear drills roaring and see the occasional cloud of dust float down as construction crews shape the building into a new restaurant with pristine replicas to greet its customers; for there is no place left in Japan for the old and faded variety.
Posted by Ian at 9:49 AM 1 comment:

The Girl at the Bookstore

One experience more than any other lead me to understand the artificial constructs of Japanese society. I was at the bookstore paying for a book when I was suddenly struck by the girl working the register. She had long, wonderfully straight brown hair tied back in a ponytail with bangs hanging low on her forehead and big bright eyes that shone as she smiled at me. And what a lovely smile it was. I’ve always been a sucker for a pretty smile; and the way her whole face lit up as she took my money, wrapped up my book, and graciously thanked me for my purchase sent my head spinning. I smiled coyly back and responded with a flirtatious you’re welcome in Japanese, to which she again bowed with that enchanting smile.

I was proud of myself—she was a beautiful girl, and here she had shown me such rapt attention. I turned to catch her eye again and saw her backed against the wall, arms folded securely in front of her as she stared vacantly into the distance ignoring me who had just flirted so successfully with her. She had become a completely different person. Our interaction had finished, and there was no further need for her to even acknowledge my presence. Her face, which had once radiated such bright energy, was now blankly devoid of all emotion. The change was so abrupt and so complete that it left me feeling confused and uneasy about what I had seen.

The girl at the bookstore had been ordered by her boss to smile and bow politely at me even though she didn’t want to. She did it because she had to. I see that attitude everywhere I turn now, and I can’t make it go away.
Posted by Ian at 3:21 AM 1 comment: