Long before DVDs took the spotlight, the videocassette special edition of Pulp Fiction included an after-the feature interview with Quentin Tarantino introducing some deleted scenes—a great idea I’m surprised more videos didn’t take advantage of. (Remember videocassette special editions? And boxed sets? They were clunky and huge and their oversized boxes included vast amounts of empty space. To carry one of those massive things home from the mall in your shopping bag was to know that whatever funds you’d managed to scrounge up that month had been well-spent.)

The best of the deleted scenes (which Tarantino describes as sounding “more like someone trying to write like me than me”) takes place right after Vincent Vega (John Travolta) arrives to take Mia Wallace (Uma Thurman) to Jackrabbit Slim’s. Instead of the director cutting away, Mia comes out with her video camera to ask Vincent some interview questions. Is he an Elvis man or a Beatles man? Does he like the Brady Bunch or the Partridge Family? In conversation, does he listen, or wait to talk?

The last question struck me then, as it does now, as one of the most insightful critiques of conversational style I’d ever heard. Mia implies that there are two mutually-exclusive ways of talking to people: contributing to a natural flow of conversation by responding to another person’s ideas (listening), or sharing your own ideas independently of what the other person has to say (waiting to talk). I think we’ve all spoken to people who nod incessantly, responding with a “Yeah” or a “Sure,” or possibly even a stock phrase like “Yeah I know, right?” because they’re not really paying attention. Conversations with these kinds of people are more akin to separate sharing of stories possibly (but not always!) related to the same topic. It’s frustrating, and I’ve never had any patience for it.

On the flip side, listening creates a balanced and more enriching conversation. We learn more by listening, and challenge ourselves by actually processing what the other person has to say so that we can add our own ideas to it. This is how ideas, stories, and information are shared and develop into more complex and even more enriching experiences.

Of course, occasionally we all find ourselves listening to someone incessantly rambling on in a blatantly uninteresting, ignorant, illogical, inexperienced, ineloquent, bigoted, easily disprovable, repetitive, off-topic, childish, obvious, boastful, spiteful, belligerent, self-deprecating, awkward, out of place, or rude way that forces our minds to drift away from the conversation. When our attention wanders far enough, the natural step is to plan out what we’ll say next. We all do it. It happens.

Think about it and ask yourself this honest question: Do you listen, or wait to talk?

I think real life professions would be more interesting if they involved bitter rivalries reminiscent of Twister or Raiders of the Lost Ark:

At long last, a surefire cure for cancer is within our grasp!

You’ve said it, my dear man! I’m confident that this final combination of vaccinations will yield the solution we’ve been searching for these past nine years.

They each peer through microscopes.

Look, sir! The cancer cells are dissipating! We’ve done it!

Yes, it would appear that the radiation is working its magic on the infected cells.

That’s strange...I’m detecting an irregular growth in the R5 sector.

I can’t believe it! It’s a new string of cancerous cells multiplying at an incredible rate of speed!

He looks for himself.

I...I’m not certain, but it looks like the cancerous cells are spelling out some kind of message.

Labels: Parodies of All Sorts

When businesses expand or go under, their buildings are sold to other businesses who set up where their predecessors once ran, just as when one family leaves a home, another family moves in. But what happens when an old downtown church moves to a new location? 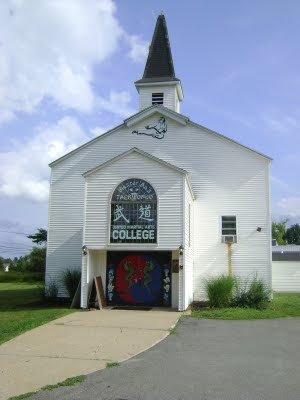 There's hardly a large number of fledgeling New England churches looking to set up shop in a cheap location, nor can one just demolish a house of God to make room for a new CVS pharmacy. The solution, then, is to rent out the space to a business who can use it, with curious results. 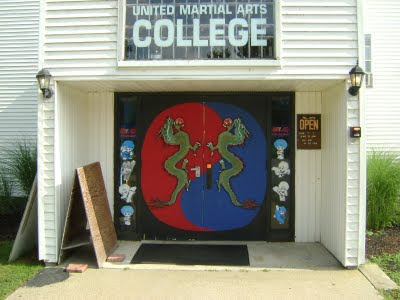 Master An's Tae Kawn Do Academy is located in Bedford, New Hampshire, just past the Everett Turnpike on the toll-skipping route between Manchester and Nashua. I stopped there on a Sunday to take some pictures. 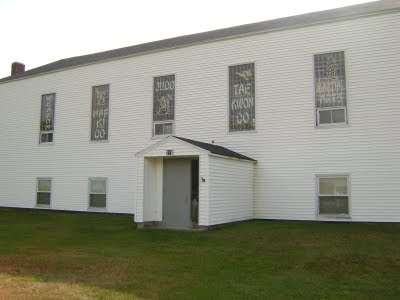 As you can see, the door has been covered with a painting of traditional Eastern dragons, and the tall side windows painted with Chinese characters. I sadly did not get a chance to go inside and see how they had remodeled the main hall (if at all). 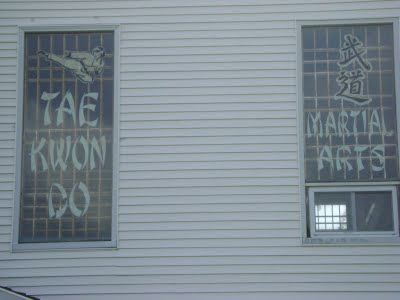 Afterward, I remembered that New Testament story about Jesus going into the temple and driving away all the peddlers and shopkeepers who were selling their wares there. If doing business in the Lord's house is wrong, then is it still wrong if the congregation has moved to a new location? When does a church stop being a church? (Think about this one for a minute.) If the congregation moves for a few years and then comes back, is the church still sacred ground while the congregation is gone? Is there a ceremony that happens after a church is shut down to desanctify the building? Or will a church always be a church long after the congregation has moved on to a large suburban location with a two-acre parking lot and a brand-new LED sign?

Other Uses for Old Churches I'd Like to See:

Labels: Reverse Culture Shock, Sightseeing in Southern New Hampshire, This post has lots of photos in it

Gemini Rue: A New Life Awaits You in the Off-World Colonies

Gemini Rue is an awesome game. And I’m not just saying that because I love Blade Runner. 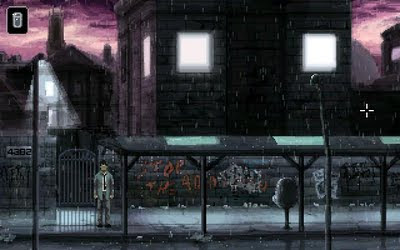 That Joshua Nuernberger’s 2011 adventure game was heavily influenced by Ridley Scott’s 1982 sci-fi film noir should be obvious to even a replicant with Mental Grade C. Gemini Rue’s protagonist Azriel Odin is a gritty, trenchcoat-and-necktie-clad cop in a crumbling city where it never stops raining and new opportunities await citizens in off-world mining colonies. However, if the game’s setting owes much to Blade Runner, it also embodies its own 1930s noir style lacking much of the sci-fi atmosphere and Asian influences of Scott’s film. Space travel and weather control aside, little on planet Barracus is actually drawn from science fiction. Azriel uses a surprisingly normal-looking handgun, busy receptionists staff mailrooms inside old brick buildings, Mafia-esque Boryokudan speak with New York accents, and residents still read about current events in their local newspapers. It’s an enjoyable, unique setting for an adventure game, though I was aghast at a shameless, shameless Blade Runner rip-off about halfway through that I’m surprised made it past the editors.

In Gemini Rue, players also take on the role of Delta-Six, who’s being rehabilitated for life outside the mysterious Center 7 prison facility. Since having one’s memory erased is standard procedure upon entering Center 7, Delta-Six and the player must discover the prison’s rules together, making for an entertaining immersion in the game’s world. 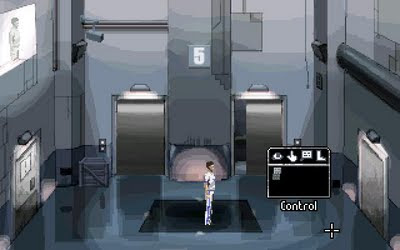 For most of the game’s second act, players can switch between playing as Azriel or Delta-Six, but this isn’t Gemini Rue’s only innovation. The game uses an interface strikingly different from the Sierra-style ones I grew up with. Just like in Phantasmagoria, players are alerted to usable game objects by moving the mouse over them. Clicking on these objects opens up a smaller screen where players can look at, operate, talk to, kick, or use an inventory item on the object. Though it took some getting used to, this system is incredibly efficient while allowing wiggle-room for different puzzles, and even the Foot icon can be used in a surprising number of ways.

As is also the case in Phantasmagoria, Gemini Rue makes excellent use of its medium to immerse us in the Gemini system that is the game’s world. Azriel’s conversations with other characters take place against the backdrop of the system’s history of civil war, revolution, and heavy crime, evidence of which we can also see by reading the game’s newspaper. Like well-timed exposition in a novel, players are introduced to Gemini’s history gradually, helping them to understand the world at their own pace. Those eager for more details, however, can use the search function on the city’s information terminals to read about people and places only briefly mentioned in earlier descriptions, proof that Nuernberger has certainly done his homework.

As impressive as Gemini Rue’s world is, parts of the game are far less interesting than others. In the third act, the excitement of the story increases in direct proportion to a decrease in the variety of the game’s puzzles to the point where most of the final challenges can be easily solved by shooting something, operating something, or moving a conveniently-placed box from one point to another, turning these sections into laborious chores as players eagerly await the next cut scene. Though the dialogue in these cut scenes is well-written and hooks players on to the story, more time could also have been spent on the mundane narration that guides us through the game. Consider, for example, a quick back-and-forth between characters:

Azriel: What do you know about Center 7?
Matthias: How should I know what the Boryokudan do these days?
Azriel: Because you worked with them.
Matthias: Well, back in my day, they used to kill the defectors. I don’t know what they do now.


Now compare it with some descriptions that players might encounter when tackling the weather station puzzle:

These chains are keeping the door in place.
This machine is off-line.
I don’t want to break it.
Got it.


Despite these setbacks, I still recommend Gemini Rue very highly, both as an eye-opening exploration of our own identities and proof that the indie adventure game scene is still alive and kicking. For a trailer, playable demo, and more information, check out the Wadjet Games website at http://www.wadjeteyegames.com/gemini-rue.html

(inspired by an episode of Matt Groening's Life in Hell strip)