Happy Halloween everyone. I shall be spending the holiday resting before my long weekend trip into the eastern Kanto region, and hope all of you back in the States have more interesting plans for All Hallows Eve. Halloween is not big in Japan, but to spread this proud Western tradition my school had an early Halloween party attended by students wearing various degrees of costumes both assembled and store-bought. Lack of planning provoked me to go as an American tourist in a Hawaiian shirt, sandals, and sunglasses with the tag still attached; thus marking another Halloween I celebrated by wearing my regular clothes. I also carved a Jack-o-Lantern, which, though laughably simple, blew away most of the students who had never seen a real one in their lives.

In other news, I've decided to do a theme month in this blog as a change of pace from my usual assembly of non-sequiturs. All November, I plan on posting a series of non-sequiturs that either parody or adapt the style of other blogs. I find working within archetypes a fun way to flex my creative muscles; and this will also be an excuse for me to finish some ideas I've been toying with for a while. You may also spot some parodies and references to Facebook and internet exchanges that have become part of the very language of the web.

Fuck, it's really hard to write about this type of thing without sounding pretentious. I think I'll go eat some saltines and play Ecco the Dolphin instead.
Posted by Ian at 10:42 AM 1 comment: 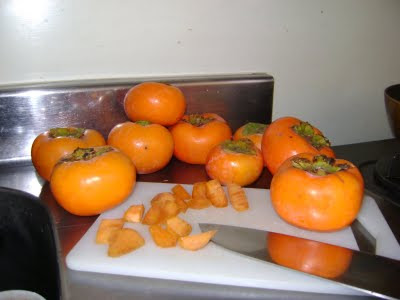 Persimmons (pictured above in a hastily-assembled glamor shot taken on my dirty kitchen counter) are a common fruit in Japan and one of Yamanashi's big fall crops. This big was the start of the harvest, so multiple students brought a total of three shopping bags worth into AEON. I plundered all I could reasonably hope to eat within the next two weeks and left the rest in the kitchen.

Persimmons (Japanese kaki) are tough fruits with an inside texture similar to a melon drained of every ounce of juice. The skin is no good for eating, so one has to invest a great deal of time slicing through their leathery outside in order to enjoy the edible portion (which tastes pleasantly similar to dried apricot). The payoff is not quite worth the work required, but the taste is unique enough so that I keep cutting up more. Plus, you know, they were freakin' free.
Posted by Ian at 6:40 AM 5 comments: 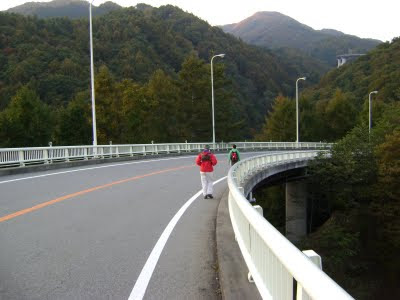 Curving along towering bridges as if the sun would never set, we share the journey without words.
Posted by Ian at 11:58 AM No comments:

Our language is a wondrous thing. Some words by their very nature evoke positive associations (blossom, sweet, caring, hero, hugable, etc) just as others (festering, bitter, conniving, villain, spiny, and so on) evoke negative ones. What fascinates me is when seemingly neutral words come adopt similar associations through our experience. Politics makes for some fine examples: in the latter half of the 20th century, propaganda convinced Americans that communism (which arguably refers to a political party like any other) would bring disaster, and that anyone adhering to it despised their country. Today, the Right tries its best to tarnish the word "liberal" in people's minds with a variety of narrow-minded accusations. "Different" is just a word for something that is not similar to something else, but in the right context it becomes a catalyst for all the anxiety of not fitting in.

"Corporation" is a fine example of this phenomenon, as I find most sensible individuals associate the word with massive, inhumane, robotic, cold, merciless, unforgiving, ever-expanding, stubborn, bureaucratic, treacherous, manipulative, scheming, labyrinthine, unwieldy, selfish, antagonistic entities bent on tormenting the defenseless individual at every possible opportunity. "Company" is far more neutral in comparison, but if I want to create a distinctly negative impression, "corporation" suits my purpose perfectly. Or, I can just as soon omit any title at all to give the entity a more personal feel. Consider:

Nijiag has big plans for the future.

This fictitious (not to mention hastily assembled) example conveys an optimistic feeling; as if Nijiag were a person we knew well and was trusting us with his or her mission for positive change. The syntax in the sentence is the same as if Nijiag were an individual. Now consider:

The Nijiag Corporation has big plans for the future.

Suddenly, our subject doesn't seem so friendly. The article "the" opening the sentence turns Nijiag into an nonliving thing lacking human characteristics, and "corporation" removes all doubt. Nijiag is not a person, it is an assembly of people and business ventures combined for the purpose of profit. It is mammoth, frightening, and appears to have ambitions of its own. Those upcoming plans suddenly feel a tad more sinister.

This negative use of "corporation" is achieved wonderfully in the Bond film Moonraker (despite its countless other shortcomings) where the villain's business enterprise is constantly referred to as the Drax Corporation. Blade Runner achieves a similar effect with the Tyrell Corporation. I hope that one day I too have the opportunity to use this superbly loaded word in my own writing.
Posted by Ian at 11:20 AM 6 comments:

If the pen is mightier than the sword, then maybe I’m justified in agonizing over my choice of writing implement. 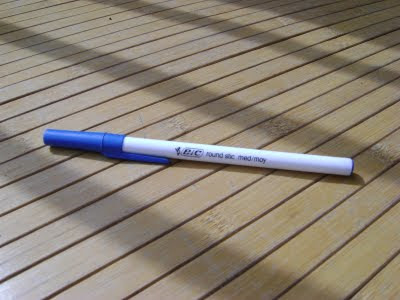 This is a blue medium-size Bic pen. It is about six inches long with a plastic cap; and is available in twelve-packs at any supermarket, pharmacy, or big-box office supply store in America. I always assumed that moy was short for “medium” in another language, though I was never curious enough to find out which one. I have no idea what size tip it has, because for me it doesn’t matter.

I have carried this same model pen in my right front pocket for the last ten years for the reason that if I can have consistency in my writing’s appearance then I can concentrate more on expressing the ideas themselves. Its shape feels reassuringly familiar, and I can instantly recognize any notes, comments, reminders, journal entries, flash cards, To-Do lists, or hasty sketches I’ve made with its never-changing dark-hued blue: daily reassurances in a world where so much is constantly dying; breaking apart; growing old; moving away; or getting lost, stolen, molested, and smashed. 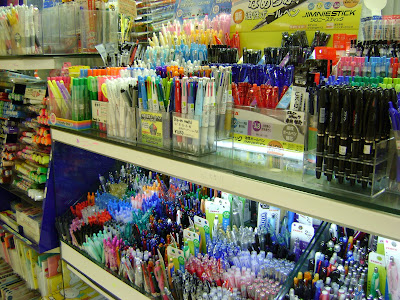 My problem is that no one sells plain Bics in Japan, and now I’m down to my last one. The Japanese take great pride in presentation—including their writing—and the stationary stores stock endless shelves of writing utensils in varying brands, colors and sizes; complete with long paper strips where giggling schoolgirls scribble notes to each other in kana and an occasional gaijin leaves cryptic English messages. These pens cost about 100 yen apiece (roughly four times the cost of an American Bic), with even more expensive models regularly sold in glass cases outside specialty shops. I find their rubber grips strangely soft, their shape distractingly contoured to my hand, and fear I’ll mark up my pockets if I jostle them the wrong way. Pens toting three or more colors are a huge fad, though I find their tiny triggers inconvenient and their variety unnecessary. Pencil cases—carried in the West only by sketch artists and elementary school children—are a daily appearance; and in class I constantly wait while students fumble in multicolored pencil cases for mechanical pencils and lead-smudged erasers.

I wonder how I must look twirling my old Bic between my fingers, popping off its cheap cap one-handed, and scribbling blue ink-smudged comments on their papers? (The Japanese, almost without exception, write in black.) Do people think me sloppy or lower-class because of the pen I carry? Or is it a sign of disrespect that I don’t wield a black 1.2 mm press-on Zebra Jimniestick with a rubber grip, brand name stenciled on the shaft, and auto-lock springclip? Add in the cost of shipping Bics from the States and the choice becomes fierce. Should I sacrifice the comforting familiarity of the pen that has become my trademark, or betray it in favor of a cool new Japanese model that will help me fit in?

I deliberate about these changes as if they threatened my very identity—because as far as I’m concerned, they do. Physical characteristics like the pens we use, the glasses we wear, our choice of jacket, or (in a perfect world) our jobs should be a manifestation of our personal values. If I start making small changes to suit other people (or my perception of their ideals), someday I might be organizing my whole life around what the majority thinks. This isn’t to say that all change is bad, but we have to change for the right reasons. Were I to buy new pens; it wouldn’t be because I wanted to; it would be to please the society in which I live. In that case, international shipping is a small price to pay for my own values.
Posted by Ian at 9:14 AM 3 comments: