Purple is the Loneliest Color, or, What Happens When You Look Up Color Names in the Dictionary


Gray is one of several deceptively easy words I can never remember how to spell correctly, though my Random House dictionary says that both a and e are acceptable.  The rest of the entry reads

That a color can be so easily described in ordinary English I find astounding.  Try to outline the specifics of red, orange, or blue without using examples: you can’t do it!  Sure, you can stumble over words like bright, somber, or subtle to describe its hue, or words like rosy, fiery, or murky that are further dependent on familiar images, but each attempt comes down to the word itself: red is red, blue is blue, orange is orange.

Gray is one of several colors that it finds its identity as its place between two others.  We could say the same thing about the other in-between sections of the color wheel, for example, green:


green (grēn), adj. 1. of the color of growing foliage, between yellow and blue in the spectrum.

Here, the writers have again used other colors to assist readers in imagining the color green, but they’ve also—first and foremost—compared it to a familiar image: growing foliage.  Not autumn foliage, but green summer foliage.  (Though I would never have thought to use those two words together, it’s a beautifully succinct way of describing green leaves without using the word green.)

Growing foliage is the idea the Random House folks believe will help the largest number of readers imagine the color green without ambiguity.  It’s a diplomat into the indescribable realm of colors, an honor held by a few other images:

Here again the images are from nature, this time two foods.  Yellow, it turns out, is the only color to have two dictionary images, probably because egg yolks and lemons both readily present themselves to readers.  Here’s red:


red (red) adj. 1. any of various colors resembling the color of blood.

Fairly morbid, but clearer than anything I can think of.  Orange, through the magic of homophones, takes care of the problem for us, though we can also find it on the color wheel:


or•ange (ôr′inj) n. 1. any of various reddish yellow, edible citrus fruits.  2. a tree bearing such fruits.  3. a color between yellow and red.

Though orange as a fruit is technically a separate definition, it still does the job.  Blue, meanwhile, uses an image ubiquitous to any kindergartener:

Which brings us, last but not least, to purple:

This is fine—after all, the orange definition was a little convoluted too.  However, why aren’t the writers able to capture the color with a natural, determinable image like they are with all the others?  The rest of the entry provides little help: purple can specify a kind of royal cloth, denote something as imperial, describe exaggerated literary devices, or be used for the shocking or profane.  Nor can my edition of Webster’s Ninth New Collegiate Dictionary help, though it does list purple as a mollusk of the genus Purpura that yields a purple dye.  (That’s right, purple is a kind of mollusk!)

I’m tempted to criticize my dictionaries until I attempt to find my own image to describe purple.  An amethyst?  Not common enough.  A violet, as in the type of flower?  This would work, but it makes for awkward wording, and doesn’t match the power of sky or blood.  A certain part of a sunset?  No way of telling which part.  A bruise?  Again, not all bruises are purple.

Purple, then, becomes a color lacking the natural familiarity we find in the others, a foreign, man-made hue.  This may be what led its rarity to be prized by earlier civilizations, and why purple is a traditional color of royalty, though under different circumstances the reverse could easily be true: without an easy way of identifying purple with the world around it, purple becomes a lost, misfit, lonely color.  Like anything that doesn’t synch with the natural, we can view purple in different ways, with the result that how we finally do view the purple in our lives becomes a litmus test to determine our relationship with the abnormal.
Posted by Ian at 12:01 PM No comments:

On the Writing of "Salinger's Wishes" 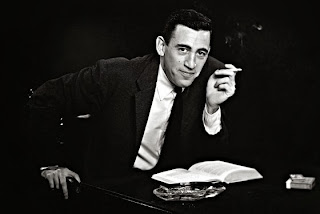 An essay I originally wrote for this blog about the leaked J.D. Salinger stories recently appeared in The Millions literary magazine.  For those who haven’t heard, back in November, a manuscript entitled Three Stories by J.D. Salinger surfaced online and has been passed around widely since, in discordance with the author’s wishes that they (along with his other work) not be published until specific intervals after his death.  The essay proposes that Salinger kept the most polished of the three, “The Ocean Full of Bowling Balls,” hidden because it tells an earlier version of Holden Caulfield’s brother’s death and focuses the tragedy for the reader less effectively than The Catcher in the Rye does.  The subject matter and timely nature of the essay seemed to make it worth submitting, and a few e-mails was all it took.  Writers like to pretend that submitting is an arcane, secretive process, but having never submitted a literary essay before, I found it surprisingly easy.  Click here for the link.

I don’t take a strong stance on Salinger’s strict, almost obsessive desire to keep his writing and personal life hidden.  If anything, I believe the man was entitled to his privacy, though I venture that his reclusive behavior probably did more to rouse attention (intentionally or unintentionally) about his life, writing, and personal relationships than a New York literary life would have.  Though we don’t know enough about Salinger to judge why he stopped publishing, the leaked stories provide some clues.  Two of them are rough drafts with crossouts, misspellings, and incomplete character relationships.  That Salinger chose not to polish them implies that he’d lost interest in them.  When I read “The Ocean Full of Bowling Balls,” however, I saw a story that was ready for publication but showed three Caulfield brothers that were different than the ones in Catcher.  Because Salinger chose to change their relationships and the presentation of events in the story, we can infer that there’s something inherently unfinished about “Bowling Balls,” something that wasn’t what the writer wanted.  While Salinger’s reasons for guarding his later, finished writings may be shrouded in mystery (for a few more years, at least), his reworking of elements from "Bowling Balls" into Catcher provide more telling evidence.

I found myself drawn to Salinger’s process because, as a writer, I know it’s hard to get it right the first time.  This goes double for writers just starting out, as Salinger was in the 1940s.  While we can enjoy a novel or movie sequel safe in the knowledge that we can pick up our favorite characters where we last left them, readers of “Bowling Balls” must remember that its characters aren’t fully developed the way Salinger wanted them, and can't exist in the same world as Catcher.  Can we still enjoy stories like “Bowling Balls” with the understanding that they’re prototypes?  Of course.  But it requires extra effort to avoid being pulled out of the story, effort that isn’t required when we read Faulkner’s novels or watch Kevin Smith movies, and effort that’s harder for most casual readers to muster.  Salinger understood this, which is why he didn’t want “Bowling Balls” published but was fine with leaving it in the library for the scholars to read.

I expect, though, that as more of Salinger’s works are released and more facts revealed about his life, Salinger fans will understand more about his secrecy and his existing canon.  But we don’t have those answers yet, which is why people have made pilgrimages to his house or traveled to research libraries to read his early stories.  It’s natural to want to know more about the things you love, and frustrating when you can’t find the answers.  Nick Hornby writes about this in Juliet, Naked, where online myths and legends run amuck about a rock star who’s left the public eye, and when we find out how banal his life really is, the legends appear all the more ridiculous.

I’m not saying that people shouldn’t read the Three Stories manuscript, but I do think that, as I write in the essay’s final sentence, they should view the stories as experiments from an earlier time.