Calamity Cash and the Town With No Name: A Success Story

My good friend, former roommate, and fellow writer Randall Nichols just released his own indie comic, Calamity Cash and the Town with No Name, a collaboration with artist and fellow West Virginian Justin Cornell 4+ years in the making. This is a success story of the kind you don’t often see in the post-college abyss: a writer and an artist, both contending with their own responsibilities and commitments, harness the time to produce a full-length comic over a period of years. This is evening and weekend warrior shit at its finest, and now they’ve invested the capital in their very own print run. That’s why you should buy it. 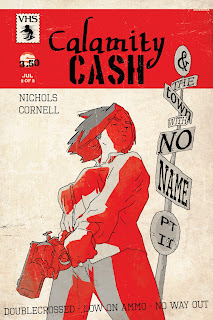 "Calamity Cash & The Town with No Name" Synopsis:  The mother/daughter vigilante team of Tana and Cal Cash are on the run from an Afro-rocking, Kung-Fu assassin, and have been forced to make their last stand in a nameless desert town hiding a unbelievable secret - every last citizen is in the Witness Protection program! Out of gas, low on ammo, and with their backs against the wall, Calamity and Mama Cash become the town's unlikely protectors, but with friends so quickly becoming enemies, and old enemies becoming friends, is the whole place doomed to burn around them? And will our heroines be the ones to light the first match? A modern-day action/adventure western with words by Randall Nichols, and art by Justin Cornell. "Calamity Cash & The Town with No Name - Pt. II" (25 pages, $4.50 w/shipping).  [from The Mojo Wire]

If that doesn't wow you, here’s another reason to buy: Randall’s work is witty, bitingly observational, and he portrays his vagabond, struggling twentysomethings with an insightful sincerity that never stoops to melodrama or cliché. Based on my dealings with the writer, I can guarantee you that this is going to be good.

One more reason: copies are only $4.50 (including shipping!) signed by the author and the artist. Click here or on the picture above to go to Randall’s blog, The Mojo Wire, and purchase via Paypal.

For those of you still reading who haven’t yet clicked above, I’ll give you another chance to buy Randall’s comic now.

It’s uplifting to hear that, in a world teeming with mundane distractions and lacking the financial and emotional support so vital for creative work, projects like Calamity Cash are getting finished instead of abandoned. Projects like Cash need an audience willing to shell out the few bucks necessary to keep them coming, but lack the marketing resources of a large publishing house to spread word of their existence to an overcrowded market. To know that so many projects have gotten off the ground through Kickstarter and other grassroots campaigns is inspiring, though even the most promising or awe-inspiring of projects is doomed to failure unless people know about them. I look and listen to the advertisements surrounding me on a daily basis and find that most of them feature products I already know. Yes, Coke is a sweet drink, Planet Fitness is a badass place to work out, and Old Spice makes you irresistible to women. Mass advertising, though its secondary purpose is to inform, first and foremost inundates us with those products profitable enough to warrant support while the smaller ones struggle to get noticed. How many amazing comics, novels, blogs, musicians, movies, webcomics, animated films, photographers, architects, dramatists, and other media could we discover if only we had the means?

Randall realized this long before I did, and, for a significant period after we left Bennington, blogged, Tweeted, Facebook shared, and generally talked about as many of his friends’ projects as he possibly could, to the point where his social networks obsessively centered around the achievements of others. My own meager work failed to escape his attention, as he tweeted a lot of things from this blog and eventually devoted an entire Mojo Wire entry (featuring one of the most unflattering pictures of me ever to grace the internet) to my metablog project Corporate Takeover. When asked about his constant sharing, he said that his friends were doing great things and he wanted to help in any way he could.

Creative pursuits (especially writing) are isolating avocations, and for those of us lacking contacts, the chances of getting your work noticed can be frustratingly slim. We owe it to ourselves to harness those resources available to us, but we all need friends willing to shout our achievements from the metaphorical rooftops of social media and weekend drinking sessions. We also owe it to those friends to return the favor without being asked.

So again, buy Randall’s comic for a measly $4.50, or explore the blog to read about its long, arduous history. For those who enjoy samples, try some of his fiction: New Hooverville, Arches, and more . Or take a peak at the writer himself during our more formative years: 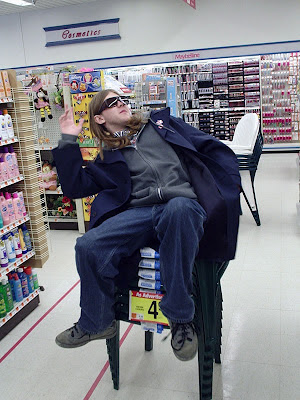 Revenge is sweet. Thanks for the support, man.
Posted by Ian at 9:49 PM