Order is achieved by imposing justifiable restrictions on the masses. Restrictions are utilized to provide profit and security to the strong. When people’s individuality is inhibited by order, they can either submit or rebel. Submitting is not a consideration of this writer. Instead, loopholes have been incorporated to create genuinely high-quality content.

I don’t think anyone from the company is reading this. If there was any doubt, I wouldn’t have written that last sentence. I think I’m on probation because a computer program scanned my links for advertisements and a low-paid entry-level worker found a trace of nipple in my Nagoya picture after scrolling through the thousands of images uploaded that day. I also think my “Output” entry was censored because I was stupid enough to mention a certain corporation by name. Links, word counts, and vocabulary are all things they can catch. There’s no program to scan for opinions.

I came to these conclusions after realizing that no sentient being would have allowed my last entry to slip by unmolested. I also realized that beyond sending me those official-sounding e-mails or deleting my blog, there’s not a whole lot that they can do to punish me. If they send e-mails, I can ignore them. If they delete my blog, I can go somewhere else. Maybe another site would be better than this one, but for now I like this blog and want to stay. 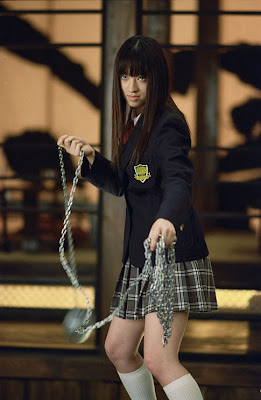 It’s like my student’s story about the high school whose strict dress codes were enforced exactly once a year. On the previously announced inspection day, the teachers would pull out their rulers to check whether each girls skirt was long enough, each boy wore the required jacket lining, and whether all of their buttons, belt buckles, shoelaces, and hair colors were in accordance with the densely-worded rules the school had enacted to better their own reputation. The students would put on their best uniforms, trim their hair, and remove their earrings for inspection, and the teachers would file their paperwork indicating that every student had met the dress code standard. The next day, the students went back to hiking up their skirts and unbuttoning their collars, and the teachers went back to doing real work. And no one ever got called out.

Maybe that’s what surviving in this world is all about. The notoriously well-behaved Japanese schoolkids knew which rules they could ignore, but possessed enough sense not to go around smashing windows or shooting heroin in the bathroom stalls. As clever beings with rational minds, we have the power to skirt an inflexible system whose sheer complexity and methodical inhumanity are its biggest weaknesses. I know how the game works now, and I won’t make the same mistakes again. I also know their computers can’t catch Samuel Beckett references: I must go on. I can’t go on. I’ll go on. Laugh outloud.
Posted by Ian at 11:47 AM

Labels: Corporate Takeover, Japan from Below