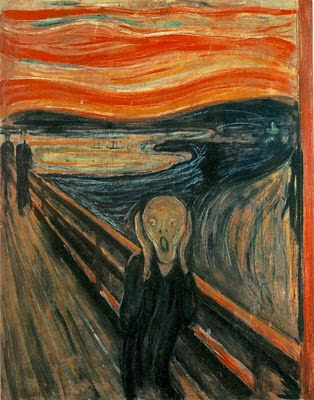 Egregious feelings of overwhelming dread and moroseness are experienced by me as I lay in bed attempting to achieve vertical stature but lacking the capacity, for today is Monday and the awareness of my deadline looms over me like a choking sickness. Strange hoarseness of breath is exhibited when I go online knowing that some vicious notification of chastisement and ridicule awaits me. I break into cold sweats as I scramble through conflicting rules, categorically quadruple-checking every line for accidental transgressions that threaten my well-being. But that’s all in a day’s work. I write in a blog.

My enemy is negatively possessed of the capability of being seen by me. It cannot be clearly imagined, and shifts seamlessly into disguises I swat at but can never catch. It controls all, and cannot be argued with, bargained with, or reasoned with. (Any similarity this sentence may bear to any film, literary, television, or other such quotation is purely coincidental.) My tracks have to be covered well. If the knowledge of how to counteract its tactics was possessed by me, I’d utilize it.

No rules were meant to be broken. The knowledge that the link was prohibited was not possessed by me, for I didn’t understand what they wanted. (If you’d really cared about doing a good job, you’d have read the rules thoroughly.) I was the recipient of confusion. (That doesn’t matter. It’s not your job to question the rules—it’s your job to follow them.)

Long ago, the foremost goal previously assembled by me was to write well. But there is this fear justified now by me (one that I’m certain was never there before, though maybe I always just ignored it) that this objective has been obscured behind lines of endless regulations whose sole purpose is to ensnare me. No—it’s more than that. Malice is not their primary consideration. It is some twisted, categorical attempt to mold perfection out of routine and order, as if creativity could be pounded out on an assembly line and innovation sold wholesale.

Creativity was previously possessed by me. Ideas necessitating to be utilized for allotment among the masses was a primary consideration of mine. (I just wanted to do a good job on this blog.) Contradiction is inherent in the juxtaposition of these two differentiating apperceptions. I am tied variously by loyalty and self-expression, and one of them has to go. (I could quit, but I don’t want to.) So, instead, my opinions are checked by me at the door. (You have to. It’s your job.) It would be done so that I might continue manufacturing these entries, though the burden of the rules combines with the constant hounding for more output, more words, more vocabulary, and more money. (I hear those words in my sleep; a casualty of overwork. Speaking of which, I mustn’t forget the final obligation.) Itterasshai.
Posted by Ian at 6:04 AM