The Various Pieces and Patterns of Motion Involved in Shogi 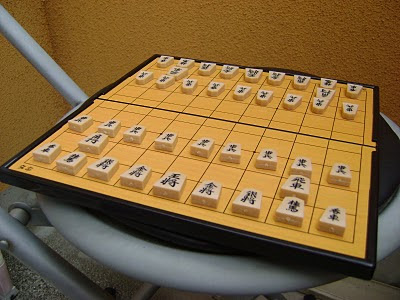 Japanese chess, or shogi, is a game necessitating multitudinous skill and consideration. It was discovered by me through conversations with various Japanese people, and though the majority of those spoken to professed some familiarity with the game, it appears to be played only by middle school students and the elderly. I recently acquired a cheap set on an excursion to Tokyu Hands, which is located in Shinjuku. (If I had the space, I’d write more details about that day because I really want this to be a good entry. I’ll try hard to make it so.)

Shogi is played on a nine by nine board, with some pieces maintaining similarity to Western chess pieces, and others bearing little resemblance. As a paragon, each player possesses nine pawns (would the Japanese name, fu, be more appropriate?) possessing the sole capacity of forward motion. The variance lies in the capturing of opponent’s pieces, an action which must be enacted by moving forward instead of on the diagonal plane. (Did my last parenthetical clause count as a sentence? Scrolling through dense rules attempting to find out leaves me more confused than before.) 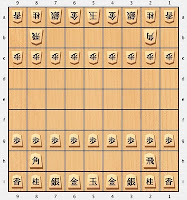 One bishop and one rook are possessed by each player, though no piece resembling the queen has been incorporated into the game. Two knights are prohibited from moving backward, and progress forward in their customary pattern. Consequently, a player’s attacking power is inhibited by the number of pieces solely possessing short-range kinetic means. (That parenthetical half-sentence worries me. Does it break the rules? Will I be caught and subject to berating and revision by unseen hands?) These other pieces, though initially a confusing exhibition, require further explanation so that their function may be understood by the novice player.

One such piece, the lance, is placed along both edges and can only be propelled directly forward. (I have only 171 words left, and fear I will be unable to properly sort them into two five-sentence paragraphs with enough room for a final sign-off.) Initially flanking the king—whose locomotive patterns are identical in both versions—are two gold generals which move one space in any direction with the exception of backward diagonally. Two silver generals (I have a headache, but it’s nearly 7:04 and I must make my deadline) are utilized for backward diagonal defense. However, they lack the sideways motion necessary for expeditious flux along the back lines.

This combination of (I could revise and write this well—including all the number-crunching—if only I had more time) limited mobility achieves (It’s my own fault. I should have finished this yesterday instead of Skyping with Kyle and climbing Mt. Atago in the cool evening breeze. Work always comes first) a uniquely tight game (Taking those silly pictures took time too. I needed that visual) quite unlike the (I just want to be done) distant strategizing of Western chess. Itterasshai.
Posted by Ian at 6:04 AM

Ive always been fascinated with the concept of Shogi. when you get home, i request lessons.
I learned go a while back, thats another great one.

It is a kick-ass game, similar enough to Western chess that you won't feel totally lost, but with enough crazy differences to make the game really interesting. We will totally play a round when I get back!

I look forward to it.