This past Golden Week I headed west to Nagoya with the objective of seeing numerous museums and enjoying myself thoroughly. If you’ve never heard of Nagoya, don’t feel bad. Though it’s Japan’s fourth largest city, it’s not much of a tourist destination. There’s nothing special about the city really; its capacity for culture is low, and it’s mostly known for its regional foods: misokatsu (fried pork breaded with miso), tebasaki (fried chicken wings), and hitsumabushi (I’m not sure what this is because the line outside the restaurant was too long, and we were unable to achieve entrance). 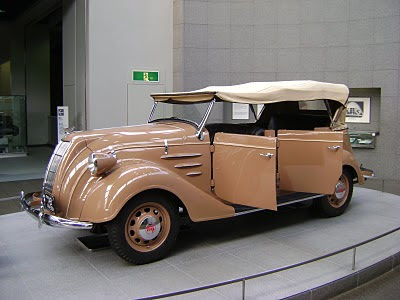 Nagoya, however, is widely known as the birthplace of the Toyota Corporation. The company was started as a producer of high-quality looms and many cars are now manufactured by it. I took a shiny new commuter train out to the sun-bleached suburbs to see the Toyota Automobile Museum, which incorporates Japanese, American, European cars into its exhibitions. Most of the Japanese cars exhibited were post-WWII, as most of the pre-war cars were scrapped due to wartime metal shortages. One of the few pre-war Japanese cars at the museum, a Toyota model utilized by top military commanders, is pictured above. 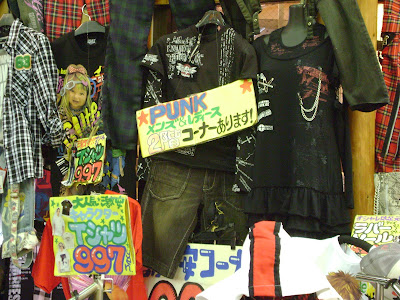 The way in which people were dressed was observed by me to be the biggest difference between Nagoya and other parts of Japan. Whereas Yamanashi’s fashion-conscious population is inclined to dress mainly in darker, subtle tones; and fashions of all kinds abound in Tokyo and Osaka; Nagoya fashion was commensurate mainly to American teenage Hot Topic style. Poor English could naturally be seen on these shirts. Everyone wore those ridiculous white shirts with black script that I abhor, and bright colors mixed with subdued ones. And of course, there were the Crocs. Hundreds and hundreds of Crocs. 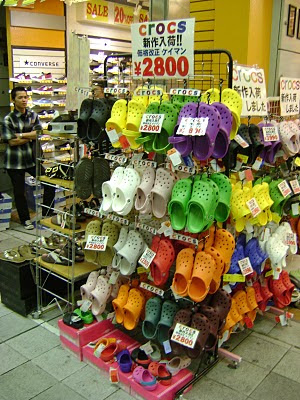 The utter stupidity of American hyper-consumerist fashion seems to have been embraced wholeheartedly by Nagoya. The fashion gave the city a very suburban feel (hip-hop looks were also embraced by many, including some infant children), and brought back unpleasant memories of American shopping malls. I wanted to tell all of them to diversify, but instead I saw them as an interesting curiosity. I also saw more tattoo parlors in Nagoya than I have anywhere else in Japan, and many people boldly displayed their arm and back tattoos in public; a very Western thing to do. 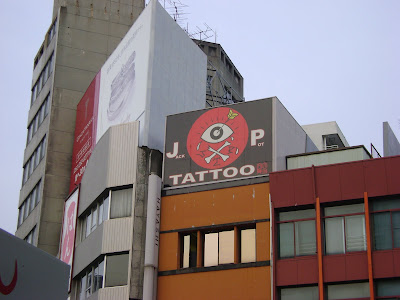 This image has been removed by the Erochikan Quality Control Team because of pornographic or otherwise objectionable content and its owner been issued a warning.

That’s not to say Nagoya is like a walk through suburban New Jersey. As the above photo indicates, they have their share of geeky manga cafes and scantily clad women posted outside their pachinko parlors. Outside my men-only capsule hotel I was also assaulted by several employees of girl bars providing suggestive tissue packets to passersby, and the same pink-light strip clubs were also walked hurriedly past by me. Said capsule hotel was also utilized by a transvestite in a blond wig, but that’s a story for another day. Itterasshai.
Posted by Ian at 6:04 AM

Well. Sounds like your Nagoya adventure was almost as bad as mine! Fuck that Erochikan company, I wanna see hot naked women with tattoos!
Now that Toyota is tanking, what will Nagoya have to offer the rest of the world??

Wow! Tattoos being openly shown! That's pretty cool, actually. I have to work my ass off to hide my small tattoo on my shoulder because I can get fired for it if anyone even catches a hint that I have one....frustrating. Such is the nature of Child Education in Japan.

That's funny because one of my friends here has a Mario 1-up mushroom on her upper shoulder and she regularly wears clothes that show it off while teaching kids. She works at one of those eikaiwas where there are really no rules, however, so it's OK because she's a gaijin.