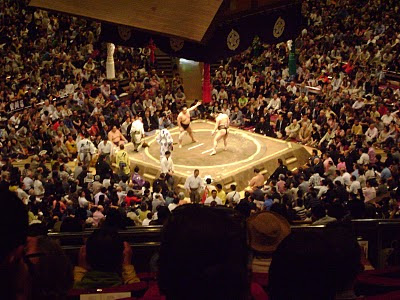 Sumo was observed by us this past weekend at a large stadium in Tokyo filled to maximum capacity. If you’ve never seen Japanese sumo wrestling, don’t feel bad, since most Japanese people haven’t either. Like many of the country’s traditional arts, sumo has been relegated to a kind of novelty status outside people’s everyday life. That didn’t make me any less inclined to see it, however.

Sumo is held every few months in different parts of the country during massive daylong tournaments with dozens of matches. Each match lasts anywhere between ten seconds and three minutes, though the bulk of the time is spent in elaborate psych-out ceremonies before each match. An elaborate routine of shifting their weight to one foot, throwing salt into the ring for purification, bending down, and staring into each other’s eyes is adhered to by the wrestlers (see top photo), and the match begins when both feel ready. This loose system of commencement ran afoul several times when one wrestler flew forward before his opponent was ready, and both immediately stepped back for several more minutes of psych out time.

The rules of sumo are simple. Unlike wrestling or boxing, there are no weight classes; instead, wrestlers are divided up by skill level. (My friends were not interested in watching ten hours of sumo, so we arrived only for the top matches in the last two hours.) After the aforementioned psych-out period, the actual match finally begins as the wrestlers struggle to either a)knock the other down, or a)shove the other out of the ring. Both methods were utilized for victory by numerous wrestlers. The winner received something I couldn’t see from the upper seats, and suddenly the next two wrestlers were in the ring psyching themselves up again. 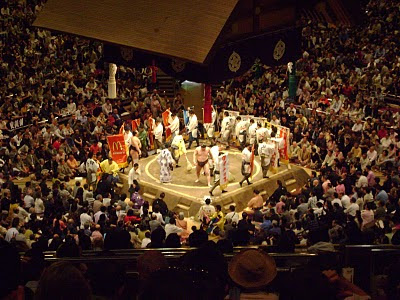 Undoubtedly the funniest thing observed by me was the incorporation of advertising into a tournament otherwise made out to be traditionally Japanese. Every few matches (more often as completion was neared) a line of men carrying advertising banners would climb the steps into the ring and exhibit their wares for the consideration of the audience. Most of the ads were written in Japanese, but one of them featured a very modern-looking McDonalds logo. Hardly contemporary to Edo Japan, but justifiable considering those advertising slots probably cost a lot of money.

A good time was certainly had by all on this outing. I wish I’d gotten to take more photos (which would probably give me more to talk about in this blog entry), but most of my match photos didn’t come out well and my photos of wrestlers outside the arena were pretty lame. I would like to have researched this entry more thoroughly, but I needed to finish it before my deadline. With my limited knowledge, it’s kind of hard to think of things to say about sumo. I definitely recommend it though. Itterasshai.
Posted by Ian at 11:47 AM

I totally would have watched the whole show. Every skill-level. It would have been amazing. And you'd have had more pictures of hefty folks pushing each other than if we'd spent Christmas at Wal-Mart.

I occasionally watch sumo myself... it can be pretty awesome at the championship level.

Two super-fat guys grappling and grinding, the sweat glistening off their rolls upon rolls, the cholesterol chugging through their flabby limbs and arteries.... OH! Excuse me, I believe I just jizzed all over myself. Does the salt help with that??

I wish I could have convinced the others to stay for the whole show, but sadly the draws of sleeping in, a leisurely lunch, and idle wandering were too much to turn down.

I'm also not sure how effective salt would be as a cleaning agent for human semen, having never tried myself. Soap and water seems to work just as well.